Island gifted by nature, Skiathos has lush vegetation, idyllic beaches and golden beaches. Its cosmopolitan character and tourist infrastructure – several hotel units, organized beaches, sea excursions – attract numerous visitors from all over the world. From Skiathos came, among other things, Alexandros Papadiamantis (1851-1911), one of the most important Greek writers, and Alexandros Moraitides (1850-1929), a literary writer. The highest peak of the island is Stavros (433m).
The capital and port of the island with great tourist traffic, the city of Skiathos stretches along the beach and in low hills. The busty little Bourtzi Peninsula, an ornament at the entrance of the harbor, welcomes visitors. The modern settlement, with hotels, restaurants, cafes and tourist shops, embraces the old town, which retains its traditional color – white tiled houses and mansions, old churches, paved pedestrian streets, picturesque alleys and cobbled streets.
The tourist traffic is also remarkable, visiting in the restaurants, cafes and night clubs of the coastal road, which leads to Tarsanas, in the eastern part of the city. Here skilled skippers “built” sometimes impressive boats, traveling to America (now only ship repairs are done). In the western part of the city, in the Siferi area, beneath the “Memmouria” (cemetery), there is a shipyard. From the old harbor boats begin to take excursions to the enchanting beaches of the island, Castro, Lalaria, the nearby islands, Skopelos and Alonissos. Numerous sailing boats and high-speed boats are hosted in the marina. Skiathos Town has 4,988 inhabitants. 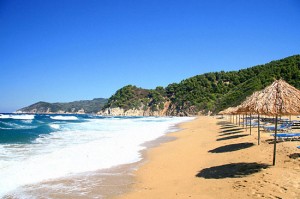 Area in the northwest part of the island, with a beautiful sandy beach – many tourists visit it by road or by boat. The Aselinos-Kounistra Monastery – Small Aselinos – Alygaria – Kehria is of exceptional natural beauty, with rich landscapes. At the beaches of Aselinos, Alygaria and Kehria (Paradez) there are cafe – restaurants. Aselinos is 13 km away. West of the capital. 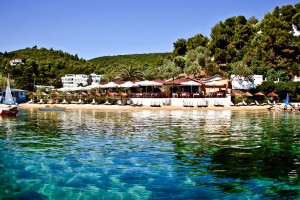 Area with a wonderful natural environment and lacy beaches. Kanapitsa and Tzaneria have large hotel units, luxury villas, a remarkable tourist and cosmopolitan character. Kanapitsa bay rents boats, watersports and a ski school. Kanapitsa has 86 inhabitants, It is 7.5 km southwest of the capital. 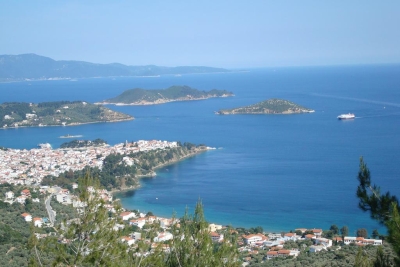 Area with hotel units, built on a slope, with beautiful views of the southeastern part of the island, the nearby islets and the sea. King’s boats are rented on the beach. Katsaros has 87 inhabitants. It is 6km southwest of the capital. 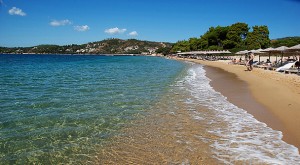 A seaside tourist settlement, Kolios has a sandy beach where boats are hired, skiing and water sports. A short distance is Vromolimnos, a small lake near the sea. On the beach of Vromolimnos there are Beach bars, juvenile bars with a special color, and boats are rented. Kolyos has 95 inhabitants. It is 8 km southwest of the capital. 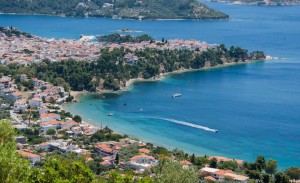 Settlements with remarkable tourist traffic, stretched along a sandy beach, where boats are hired and water sports are done. The big sand and Ftelia are 3 and 4 km SW respectively from the capital. 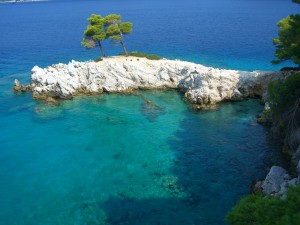 A holiday village with significant tourist traffic, Platanias is spread over an area full of plane trees. At its beach, Agia Paraskevi, water sports are hired and boats are rented. Platanias has 91 inhabitants. It is 8.5 km southwest of the capital.

The mooring in the marina is done without the use of your anchor.
At the harbor, tie the stern to the northern part of the dock. It can be hard to find space available, especially on weekends. Both shelter and grip are good. It is advisable to call VHF 77 (Skiathos Marina) for a seat.

The marina is located in the city, so all the shops (entertainment centers, cafés, supermarket, tourist) are within easy walking distance.